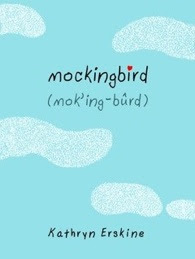 MOCKINGBIRD is due out April 15, 2010, and is currently available for pre-order. This review is part of an ARC tour from Around the World Tours.

Caitlin is a ten-year-old girl with Asperger’s syndrome. She’s recently lost her older brother, and she lives with only her father (her mother also died, of cancer, several years previously). Devon's room, all of his things, and his unfinished Eagle Scout project are still in the house, and Caitlin and her father are still haunted by The Day Our Life Fell Apart. This book is about Caitlin’s search for Closure for herself and for her father.

Author Kathryn Erskine does a beautiful job of immersing the reader in what it is like to be Caitlin. You’ve heard that an author should show, not tell? This book is a perfect example; rather than telling us what it’s like to have Asperger’s syndrome, Erskine puts the reader squarely inside Caitlin, while also showing us the reactions of people around her.

I also like that neither Caitlin nor the other characters are perfect. They are flawed human beings that the reader can relate to. While understanding Caitlin’s point of view did make me sympathetic toward her, there were also times when I could sympathize more with the other characters’ frustrations with her! But those other characters, especially the adults, also have flaws. They don’t always Get It when Caitlin is trying to communicate. Caitlin’s father sometimes behaves selfishly in his own grief.

My ten-year-old daughter also read MOCKINGBIRD and enjoyed it. While she couldn’t tell me anything in particular that she liked, I can tell you that she read it in one sitting and complained when I interrupted her reading for dinner.

I'm predicting that MOCKINGBIRD will be one of the best middle-grade/YA novels of the year. It’s already been nominated for the ALA/YALSA Best Fiction for Young Adults list. I think it’s really a middle-grade novel (the publisher has it marked for ages 10 and up), although young adults will enjoy it, too.

According to Erskine, this book was inspired both by her daughter, who has Asperger’s syndrome, and by her own reaction to the 2007 shootings at Virginia Tech.

“In the aftermath of this tragedy, Kathryn was driven to understand how community and family – particularly families with special needs children – dealt with this violent event, and how our lives might be different if we understood each other better.”

Ms. Erskine was kind enough to answer a few questions for me by email; here is the interview.

You really immerse us in how Caitlin, a girl with Asperger's syndrome, sees, hears, and feels the world. I know you have a daughter with Asperger's, but did you do anything else to help you get inside that point of view?

Yes, I read LOTS of books on Asperger's, researched, observed, took workshops, etc. I do that in all my writing. I have two dozen books and maps of Medieval England and Scotland on my desk right now for one novel, and all kinds of details of my own town's recent history, including first-person accounts, scattered around my feet for another novel. It's important to me to be able to tell a story as authentically as possible.

My ten-year-old daughter also read MOCKINGBIRD. She would like to know why the dialogue is written in italics, instead of with quotation marks.

I did that because my own daughter had no use for conventions like punctuation, spelling, or capitalization norms. I wanted to mirror the way she described her world as well as how she saw her world. In fact, I started writing the manuscript with random capital letters in the middle of sentences and lower case letters at the beginning of sentences but it really was too confusing for most of us to be able to follow! I compromised by using no quotations and no punctuation except periods (and commas only to introduce dialog). I felt that making it a little bit difficult or odd for the reader would help bring home the point that people with Asperger's experience differences in every aspect of their lives.

Which is your favorite scene in the book?

That's a tough one, but I think it's the scene in the cafeteria when Caitlin is trying to make friends. It shows how awkwardly she comes across but how difficult it is for her to communicate the way kids generally do.

You were a lawyer before you were an author. When and how did you know you wanted to switch?

My mother died when she was right around retirement age. She'd always wanted to write and she wrote beautifully. I'd always thought I'd wait until retirement to write seriously. I realized that if you really want to do something, you should do it right away -- like today.

What are you working on now?

I just finished the edits on my next book, THE ABSOLUTE VALUE OF MIKE, which comes out in the summer of 2011. I'm working on several projects: a middle grade novel dealing with endemic racism, a middle grade adventure set in the Middle Ages, and a contemporary novel about a girl and neighborhood adjusting to tough economic times--as well as a picture book and a novel for adults. There's so much to write about and I have at least a half dozen more partially written novels--I just haven't figured out how to squeeze more hours in the day!

Kathryn Erskine is also the author of Quaking. She lives in Charlottesville, Virginia with her husband, two children, and dog Maxine.
Posted by Kathleen McDade at 4:51 PM