Newbery Watch: When You Reach Me 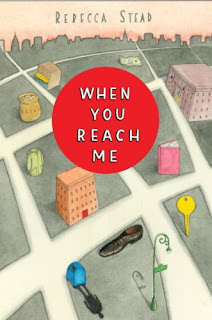 Rebecca Stead's When You Reach Me is possibly the most buzzed-about book so far this year other than Catching Fire. It's so buzzed-about, and so honestly good, that it seems sure-fire for the Newbery--but I wonder, do the books with the most buzz ever really win? I haven't been following this long enough to know. Have there been years when everybody was pretty sure something would win the Newbery, and then it did?

When You Reach Me is the story of Miranda, a sixth-grader, who has enough to do sorting out her own life (remember the sixth grade, with its mysteriously shifting friendships and alliances?) without adding a mystery. But life becomes even more complicated when she begins receiving desperate notes from the future.

(Many thanks to Monica Edinger's class for sending me an extra ARC. The book comes out July 14.)

I've read so many good reviews of When You Reach Me that it feels redundant to write one of my own; they've got it covered. But I'll try, anyway.

Many have compared this to my favorite Newbery, The Westing Game, but it reminded me much more of a dearly-loved, semi-obscure Lois Lowry novel: The One Hundredth Thing About Caroline. And not just because they both take place in New York City around the same time, and feature single mothers and lower-middle-class girls with rich friends, and both are mysteries. As in Caroline, When You Reach Me is populated with both children and adults who are real people. Characters make mistakes and you cringe, but know that you, yourself, would probably have done the same thing in that situation. It makes the book astonishingly real, so that it seems like it really happened, thirty years ago when the world was different.

I'm guessing there's probably been discussion about how the book is set in the late seventies, making it historical fiction. Bloggers and reviewers often say that books shouldn't be set in the past unless there's a real reason for it, and I wonder if some find this book to lack a reason. I've never been so picky about that, but I did feel subtly absorbed into a different era. It felt right to me. I will be interested to hear what others have to say, about this aspect and any other--ARE there any negative reviews of this book out there? Point me to them; they'll help me clarify why this book is so good.
Posted by Wendy at 6:51 AM 2 comments:

I loved American Girl dolls from afar when I was a kid. They were a new thing, and there was only Kirsten, Samantha, and Molly. (Even then, I thought it was weird that all the dolls were white--especially when they added a fourth white doll, Felicity, instead of the Filipina doll I thought they should create.) I read lots of the books, and while they're mostly pretty boring, I have to recommend Molly Saves the Day as being an excellent and accurate summe

r-camp story. And I'm sure many of you have the same story--I loved poring over the catalogue and admiring all the accessories. I was especially intrigued with their school lunches, which all looked delicious.

I think I was fourteen when I finally got Molly for Christmas.

I've only sort of kept up with new innovations in American Girl since I've grown up; the decrease in quality after Mattel took it on took away a lot of the charm for me. Laurie and I did visit American Girl Place in Chicago, though. It was fascinating to finally see the catalogue accessories in real life, but mostly I just felt like I wasn't CLEAN enough to be in that sterile environment. Also, watching the young women style doll hair at the doll hair salon, I thought that they must totally love their jobs.

Anyway, you may have heard--it was reported in the New York Times--that American Girl has come out with a Jewish historical doll, Rebecca Rubin. There's been a lot of interest and argument in the children's literature world about Rebecca--much of it from people who aren't terribly familiar with the American Girl franchise, I must say. (I don't expect much of ANYTHING from American Girl books, and I don't know why anyone would.) Also, it always bears repeating, including to me: "Your experience is not universal." I've yet to hear about any "inaccuracies" in regard to Rebecca that are really serious or even proven; one scholar will say one thing, and another will totally refute it. But seriously: we're talking about Mattel. It's not like we're choosing a Newbery winner. THAT is serious stuff.

So I was really happy to read this review in a Jewish publication, which I think has a nice balance and a positive attitude that I suspect is not misplaced. Thank you, Susan Ellman!
Posted by Wendy at 4:27 PM 1 comment:

I have a guest post of sorts up today at author Laurel Snyder's blog, about one of my favorite authors, Edward Eager: Eager Readers Backwards Blog Tour. I'm in astonishingly illustrious company, because the first guest post was from author Mitali Perkins.

Snyder has a new book out, Any Which Wall, which she says is an Edward Eager tribute. I'm looking forward to it.
Posted by Wendy at 3:39 AM 1 comment:

Liz Burns has a terrific analysis of a recent WSJ article about young adult fiction. I agree with almost everything about what she says, so I'm just going to point you there.

The article is riddled with the factual errors you usually find in articles about kids' and YA books, and Liz details some of them. (It occurs to me that probably most articles are riddled with errors; this is just the stuff I happen to know about.) But overall, for once, they're on the right track. And what I especially liked, and what Liz didn't like, was that the article cited "Mary Ingalls going blind" as an example of how YA literature has always included some dark stuff. I didn't like that they said she went blind in Little House on the Prairie, when everyone KNOWS it was By the Shores of Silver Lake, which actually is a YA book. But I think it was a great example to use. Mary's blindness really is very dark and sad, though I think I see that more now, as an adult. And I love it when people writing about this stuff look at a broad historical range. (You've all heard my Newbery rants, I'm sure, about how if anything Newbery-winning books used to be even darker, like Strawberry Girl and Roller Skates.) Liz would prefer Robert Cormier as an example, but by using Mary Ingalls, the journalist reaches back further and makes a less obvious example that will really make people think.

I would also like to note that:
-I don't really think The Hunger Games is that dark, and
-Please, tell me WHEN YA has chiefly consisted of "fizzy escapism". NOT EVEN IN THE FIFTIES, PEOPLE.
Posted by Wendy at 12:34 PM 8 comments: