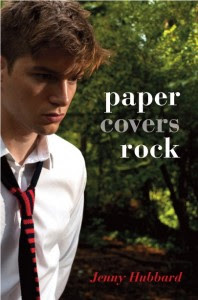 Alex is a junior at a boys' boarding school in North Carolina. He and three friends decide to drink some vodka and jump off of a rock into the French Broad River. One of them dies. This book is about the aftermath. Will the school find out that the boys were drinking? Will Alex and his friend Glenn get kicked out? Or is there something more going on?

Alex is also a talented writer who has a crush on his fresh-from-Princeton female English teacher. The book is told from his point of view, as a journal/novel he's been writing.

I kept hoping the novel would turn into something better, but it pretty much stayed the same throughout: annoyingly angsty. I also kept wondering why the book was set in 1982. It didn't seem relevant to the story. Pop culture references were few and unnecessary. There were no 1980s fashion references. There were no news stories from that time involved. I didn't feel like I was being immersed in 1982 in any significant way. The only thing I could think of is that there are some issues around homosexuality in the story, and I suppose it was more of a taboo to be gay in 1982 than it is now.

There were two parts that really struck me. One is when then English teacher, Miss Dovecott, really gets the boys talking about Emily Dickinson's "There's been a Death, in the Opposite House." Alex brings God into it, suggesting that the minister in the poem represents God, who in the poem owns "all the mourners...And little boys. Dickinson is saying he owns all of us." And his friend Glenn promptly shuts down the discussion, saying that "God does not own any of us." And no one has anything to say after that. I could relate to the frustration of that moment. "One of these students...wants desperately to come back to her world -- her heavenly, wide-open world -- but it is roped off now, like an unsafe balcony."

The other is another God-moment. One of the teachers substitutes in chapel and preaches a sermon.

"There is God in all of us," he says. "God is programmed into our DNA, so He's there under our skin, biologically there, to connect us to a force larger than ourselves. It's what makes me feel not so alone in this world, as if inside of me is a seed, and if I nurture that seed, I can become my best far-reaching self." This is the first time that God has made sense to me, and I am writing it down so I won't forget it.

This is followed by:

The other guys do not see what Miss Dovecott is doing for us. They do not see how she is working by degrees to get us back to a time when our inds were freer, more connected to the world around us. More connected to what was programmed inside our DNA, just like Mr. Parkes said.

Things get even weirder after the sermon. I had a really hard time with the ending, and I'm going to hash it out here, so if you don't want to know, don't read any further.

Okay, so all through the book, Glenn has been trying to convince Alex that Miss Dovecott suspects they were drinking and is trying to get them to reveal it. And Glenn has a plan to harass Miss Dovecott, possibly going as far as to get her to leave or be kicked out of the school.

Alex doesn't want to follow the plan, although much of the time he ends up doing it anyway -- because, as he says at one point, the real honor code at a boys' school is between friends -- you protect your friends and you never, ever turn them in.

I didn't think he'd really end up getting Miss Dovecott kicked out, though, but he does. And that bothered me.

Alex thinks that Glenn thinks Miss Dovecott is onto them about the drinking. But when Alex finally confesses to Miss Dovecott, she's not so worried about that. What she thinks she saw was Glenn possibly suffocating Thomas (who may or may not have been already dead) while Alex ran for help. She doesn't know why, but Alex knows that if Glenn had done it, it might have been to hide his own (Glenn's) homosexuality -- because Thomas had seen Glenn and another boy coming out of the same shower stall.

But NOBODY, besides Glenn, knows whether Glenn is really gay, or whether he tried to kill Thomas. Glenn says neither is true, and swears on the Bible that he was only checking to see whether Thomas was breathing.

And then, after Glenn swears on the Bible, Alex goes through with the plan, invites Miss Dovecott to go for a walk, and kisses her in front of a waiting Glenn. Glenn reports this to the school authorities, and voila, no more Miss Dovecott. And she doesn't report anything at all on her way out.

Alex's final actions don't make any sense to me, except in the context of the honor code between friends -- Alex decides in the end that his friendship with Glenn is more important than the teacher he respects and thinks he loves? Alex decides that this action really is in his own self-interest? I don't like either of those motivations.

Maybe I'm missing something. Maybe there's supposed to be some deeper meaning here. I'm purposely not reading any other reviews until I publish this, because I want to be honest about how I saw it. But for me, this ending doesn't work. It's painful, and leaves me not liking Alex. And I mostly didn't like Alex anyway -- he seems like a stereotypical angsty, intelligent teenager.

So while this was an interesting book in many ways, it's really not for me, and I'm not sure it's original enough to be award-worthy.
Posted by Kathleen McDade at 10:30 PM 1 comment:

Morris Finalists 2012: Where Things Come Back 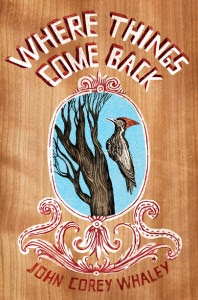 I've decided to read the finalists for the 2012 William A. Morris YA Debut Award! If you're new to the Morris, it "honors a debut book published by a first-time author writing for teens" and celebrates "impressive new voices in young adult literature." I've requested the five finalists from the library and am hoping they all come in while I'm on winter break.
My first read is Where Things Come Back by John Corey Whaley. This book was a bit of a mystery to me after reading the inside of the jacket. The jacket copy talks about lighthearted tales of adolescent love, the disappearance of a little brother, an extinct woodpecker, zombies and talking birds, without weaving any of those items into any kind of plot summary.
So I have to tell you that there are no real zombies. Real inside of the book, I mean. They're imaginary, both outside and inside the story. If you're looking for a good zombie story, this isn't it.
But it's definitely worth reading anyway. Here's what really happens: Cullen Witter's younger (and not so little) brother disappears around the same time that a college professor arrives in his small Arkansas town to search for signs of a rare woodpecker that is believed to be extinct. The whole town goes gaga over the possibility of the woodpecker being found there, and while they do care about the Witters and search for Gabriel (the brother), Cullen often feels like the stupid and probably non-existent woodpecker is getting too much attention.
Meanwhile, in alternate chapters, we hear about failed teenage missionary Benton Sage, and his college roommate Cabot Searcy. This is confusing, because there is NO explanation in the beginning for how this fits in with the Cullen Witter story. Rest assured, it does tie in eventually.
The story as a whole seems a bit haphazard at first, but things are revealed at a good pace, which frequently had me thinking "What the HECK?!" (in a good way). And at a couple of points, "OMG, I'm going to be sick." Again, in a good way.
The Cullen Witter portions of the book are told in first person, while the other portions are in third person. I enjoyed Cullen both as a character and as a voice; he seemed like an authentic teenager. Whaley has him simultaneously dealing with his brother's disappearance and dating and worrying about girls and sex, which sounds ridiculous, but it works.
Overall, this is a well-written and engaging novel. It's complex enough to be interesting, but easy enough to read in a day or so. I look forward to seeing more from John Corey Whaley.
Posted by Kathleen McDade at 6:09 PM No comments: