Dude, you think I'm funny? (Um, sometimes, anyway?) You should meet my little brother. I didn't realize he was trying to chat with me on facebook chat, and when I kept not responding, he kept writing. This eventually turned into... a pretend conversation between the two of us wherein we compare Maniac Magee with Little House on the Prairie and On the Banks of Plum Creek.

Wendy: You know, Scott...Maniac Magee is the best book I have ever read.

Scott: Oh, really? Why is that?

Wendy: You know when Maniac has nothing and the old man gives him butterscotch Krimpets.

Wendy: Yes, and the big bully treats him like Nellie Olsen

Wendy: And that Biker gang in town is like Willie

Don't you wish Scott was YOUR fourth-grade teacher?

I'm the third Burton sister to post here. Even if you know us, you may not know that we also have three brothers! Once, long ago (I don't even remember how old I was), I accidentally spilled boiling water on my brother Mike's back. I had a pot of macaroni to drain, and as I turned around from the stove with the pot, he ducked under it. He ended up requiring medical attention.

My mother gave me some of her pots and pans a few years ago, and I happened to bring that very pot on a recent extended-family camping trip. Everyone noticed, of course, and I remarked that I never, ever make pasta without remembering the burning incident and checking carefully for children nearby.

More often, though, certain tasks and activities will remind me of a quote from a book. For instance, when cooking potatoes, I always think "Eliza Jane, remember you're paring those potatoes, not slicing them, and don't leave so many eyes they can see to jump out of the pot!" (Farmer Boy, Laura Ingalls Wilder) This is followed by, "Stir the potatoes, Carrie; they'll be too brown." (These Happy Golden Years, Laura Ingalls Wilder)

Do you have any tasks or activities that are irrevocably tied to a quote or passage from a book?
Posted by Kathleen McDade at 3:30 PM 8 comments:

The Brilliant Fall of Gianna Z. 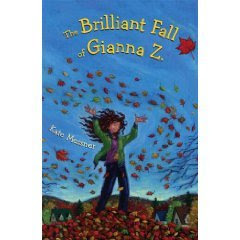 I was drawn to the ARC of The Brilliant Fall of Gianna Z (Kate Messner) at ALA because of the beautiful cover; almost turned off because the jacket summary mentions cross-country running and I'm not generally into sports books; persuaded by a sentence explaining that Gianna has "a grandmother who keeps losing her false teeth", because I'm a sucker for funny grandmothers. In the end, it was enjoyable from start to finish, smarter, funnier, and more original than I was expecting.

Gianna Z is a book that's busy without being crowded. Messner touches on procrastination, Alzheimer's, young love, middle-school friendships, botany, poetry, running, cooking, art--yet I never felt like she was trying to do too much. Gianna's life is so busy and multi-faceted that I could totally understand why she has trouble getting her science project done.

That science project (collecting and identifying 25 different types of leaves) forms the spine of the book. This is a school story through-and-through, and it really gets across how important school is to seventh-graders. Maybe too often school is almost an afterthought in middle-grade books these days, but I remember what it was like when school was pretty much everything, and when it was always getting in the way of what I'd rather be doing. To a seventh-grader it is honestly very important that a big project get done well and on time, and that can cause all kinds of angst. And as in real life, Gianna's school worries don't go away when her family life gets complicated--projects still need to be turned in. (I remember the relieved amazement I felt when I got to college and discovered that professors would readily grant extensions if a student had too much else going on. I can't remember that I ever asked for an extension, but it was nice to know they were there.)

That funny grandmother? Yes, very funny and lovable indeed; an Italian immigrant who makes co0kies and spaghetti sauce. There's even a recipe for the cookies at the back, always a great touch. I also liked a minor character who is an avid recycler and reluctant cross-country runner. And oh, there are so many funny moments:

"My hair and I have already had a long day."

I was surprised by a goodreads review that seemed to want this book to be more neat and didactic, because I loved how messy everything was, how all lessons were not learned, how everything didn't tie together neatly. I think you will, too.

There's only one thing I wish was different--I'd have liked to see the mean girl become a little more three-dimensional. I felt sorry for her.

(Oh, and because I'm kind of a snob, I keep wincing when I think about how many people will pronounce Gianna's name wrong.)

The Brilliant Fall of Gianna Z comes out September 1 from Walker Books for Young Readers. All quotes taken from the ARC, which was provided by the publisher.
Posted by Wendy at 6:28 AM 4 comments:

Not Really a Meme

Because I've moved semi-recently, and had all my books shipped to me quite recently, and have no bookshelves, my books are all stacked around me; and gazing at them got me thinking along these lines:

Five Books I Know Better Than I Know Myself: 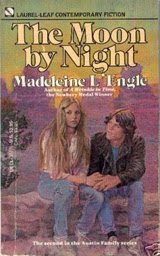 Five Books I Wish I Could Read Again For The First Time:

Boy, was that first list hard to narrow down. I could have replaced every title with something else, but I went with the first five that came to mind.

What books do you know better than you know yourself? What have you read recently that you knew right away was the beginning of a lifelong relationship?
Posted by Wendy at 7:43 AM 8 comments:

All right, this piece was written several months ago, and just brought to my attention today via Worth the Trip, but since as you know The Westing Game is my favorite Newbery, I was intrigued by the question of whether there's a gay subtext. Before I read the piece, I quickly scanned my memory for guesses as to what the blogger might be looking at. Angela's friendship with Sydelle Pulaski (those matching checkered outfits!)? Turtle's tomboyishness? Judge Ford's... Judge Fordness?

It's nothing so straightforward as that, and I think this is really more about one person's response to The Westing Game than anything I'd pick out as being queer. (Really, the most surprising thing to me was the author's comment that some of his students wonder about A Separate Peace, even though "sex and sexuality don't feature" in it. I honestly thought that was what A Separate Peace was about, even if it isn't written explicitly. Isn't it?)

Philip mentions a few other books with queer subtext, or possibly queer subtext, like Harriet the Spy. What other children's books have you considered in this context? Since Betsy-Tacy is the hot topic right now, I'll say that I've never noted the slightest hint of a queer subtext between th

e two of them, though it's questioned occasionally by fans--but in Carney's House Party, in the Vassar chapters, it's barely even hidden. The Sue Barton nurse books are crawling with it (this is probably not a revelation to any of you by this point, but the author of Sue Barton, Helen Dore Boylston, was Rose Wilder Lane's life partner). The boyfriends in Nancy Drew were never anything but a joke. The first Babysitters Club/Friends Forever book, Everythi

ng Changes, practically reads like slash fanfic--and speaking of Ann M. Martin, when I read the final California Diaries book (this series is AMAZING, I'm not kidding) I almost cried because she and her ghostwriters never came right out and said Ducky

was gay, although they left enough hints for people in the know. My most recent discovery was A Solitary Blue, which I loved loved loved and thought was very gay. Oh, and for a newer book, I haven't got a doubt about one of the characters in The Green Glass Sea and White Sands, Red Menace.

I could (and do) go on like this for a long time, but any other offerings? Or thoughts on The Westing Game? (By the way, my vote for Newbery-with-most-queer-subtext is probably The Twenty-One Balloons.)
Posted by Wendy at 11:59 AM 8 comments: