I've had the opportunity to see a favorite author two weeks in a row now!

Last Saturday, I logged onto Twitter and happened to notice that Laurel Snyder (author of Penny Dreadful and Bigger Than a Bread Box) was in Portland to do a reading! The reading was only a couple of hours from then, and across town, but I managed to get my husband to come home with the car in time, and convinced two of my daughters to come along. 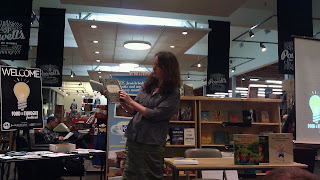 Ms. Snyder was an excellent speaker for participants of all ages. Her reading was actually part of an event sponsored by the Jewish Federation of Greater Portland, so she read from one her picture books, Good Night, laila tov, as well as Baxter, the Pig Who Wanted to Be Kosher. But she also showed us some of her earliest writing, from when she was a child, and encouraged the children to do their own storytelling, saying that any time they are playing and making up stories, if they write down those stories, they are authors! I bet she does excellent classroom visits. She was also kind and approachable and we were happy to meet her. I would have gotten a book for signing, but unfortunately Powell's did not have her novels available (only the picture books). 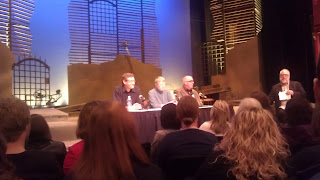 This weekend, we had tickets to a free lecture by Lois Lowry, who was in town for the world premiere of a stage adaptation of her book, Gathering Blue (second book in The Giver Quartet, but stands alone perfectly well). The lecture was actually a panel with Lowry, playwright Eric Coble, and director Stan Foote.  It was interesting, but I was also on the verge of tears the entire time, because, LOIS LOWRY!  The panel discussed the process of adapting a novel as a play, as well as the banned/challenged books issue, and took questions from the audience. Lowry mentioned, in response to questions, that her favorite of her own books is Autumn Street, which she said is very autobiographical and tells about a significant time in her family. She also shared that she never meant to write sequels to The Giver; she didn't even connect Gathering Blue with The Giver until she was nearly finished with it. And, she said that she broke into publishing children's fiction because a publisher read a magazine story she'd written for adults that was told from a child's point of view, and asked her to write a novel. And so, she wrote and published her first novel, A Summer to Die, which was one of my favorites for a while.

We stayed for the play as well, which was excellent, but afterward I got to have my fangirl moment. Lowry had also stayed to watch the play (even though she'd already seen the dress rehearsal), and afterward she took a picture with the cast in the lobby. Yes, I snapped my own picture, but I also waited around to say hello, and to thank her for the talk and for her books. I didn't want to be obnoxious, so I didn't ask for an autograph or for my own picture (they'd announced before the event that she wasn't signing, too). But I did get to speak to her! Yay! 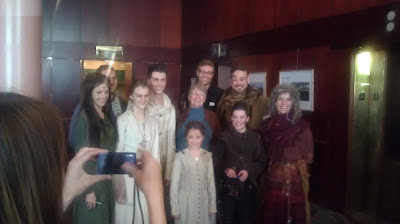 Posted by Kathleen McDade at 5:50 PM No comments: