One Crazy Summer by Rita Williams-Garcia

This is the fourth of Kathleen's reviews of the 2010 National Book Award finalists in Young People's Literature.

As you may have heard, One Crazy Summer is the story of three sisters who are sent to spend a month with their mother, in Oakland, California, in 1968. Their mother doesn't seem to particularly want them there, so she has them spend their days at a Black Panther day camp. In day camp, the children learn "Power to the people"-style slogans, make "Free Huey" posters, and post flyers for a big Black Panther rally, which is the climax of the book.

The story is told through the older sister, Delphine, who is the only one old enough to remember their mother at all (she was four or five when her mother left them). She's eleven in the book.

It was a quick read for me; I think it's well-paced for middle grade children. The period details are good, but not overwhelming -- the focus is really on the story, and the mother and children finally coming to terms with each other. Delphine's voice is well done; she's an eleven-year-old who's had to grow up too quickly and help take care of her sisters, but she still has the emotional maturity of an eleven-year-old.

I also thought the development of Cecile/Nzila was well done. She's totally off-putting at first. I wondered what in the world their father was thinking, sending them out there. And she doesn't change that much during the book. But there are little things along the way. She starts accommodating the children in small ways: giving them a radio, letting Fern into the kitchen to cook, and getting a stool for Fern to sit on in the kitchen. And more. It's subtle, and gradual, and she's not a completely different person at the end of the book. But she has made a little bit of room for the children in her heart, and (one hopes) in her life.

I've noticed elsewhere that people have nitpicked on the geographical details. I've lived in Oakland, and felt like the atmosphere described in the book fit. The geographical details are fairly vague (or renamed, or made up; I'm not sure), and this was well before I lived there, so I never placed the story in any particular location in my head.

Overall: excellent story and writing. I can see why it's in the award-watch category.
Posted by Kathleen McDade at 7:10 PM No comments:

Last night I went in my daughter's room to tuck her in and turn out the light. She had started a new book.

"The animals can talk, in Narnia," she said thoughtfully. "The beavers can. And going through the wardrobe is cool."
Posted by LaurieA-B at 6:48 AM 1 comment:

This is the third of Kathleen's reviews of the 2010 National Book Award finalists in Young People's Literature.
I had never read anything by Walter Dean Myers before, despite his award-winning status, so I really had no idea what to expect from Lockdown.
This book took me into another world, but not a fantasy, sci-fi, or dystopian post-apocalyptic world. It's the world of a juvenile detention center, and a world where violence, drug use and drug-dealing are common. And yes, it is also a world of mostly non-white people.
The blurb says "Lockdown explores an unlikely friendship between fourteen-year-old Progress inmate Reese and a man he meets through his work program at a local senior citizens’ home. " However, this is only part of the story. Myers shows us the violence inside the detention center, the cluelessness, cynicism, and cruelty of several adults there, and the cycle that keeps so many detainees coming back into the prison system.
Reese matures in this book, but at a reasonable pace. He starts figuring out what he needs to do to stay straight on the outside, but he doesn't have it all together by the end of the book. And he makes plenty of mistakes throughout.
Interestingly, the adults in the book grow, too. Mr. Hooft at the senior citizens' home at first fears Reese, because he is African American and an inmate, but learns to accept him and perhaps call him friend. Mr. Pugh, a guard, is a bully at first, but becomes friendlier later. And other adults who seem to think there's no hope for Reese begin to come around, too. I think this adds a lot to the book.
Lockdown is rich with detail and action. When I finished reading it, I actually went straight back to the beginning and read the first few chapters over again, because I felt like I hadn't gotten everything out of them the first time. If I didn't have several more books to read, I might have read it straight through again!
I think this book might be a keeper -- I'd like to read it again and get to know it better. Definitely award-worthy.
Posted by Kathleen McDade at 9:35 PM No comments: 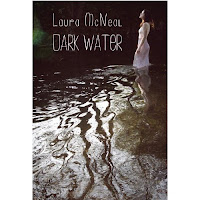 This is the second of Kathleen's reviews of the 2010 National Book Award finalists in Young People's Literature.
Fifteen-year-old Pearl is the child of recently divorced parents, pretty much abandoned by her father. She and her mother are economically destitute, living in a cottage on her uncle's avocado ranch in southern California while her mom earns money as a substitute teacher.
Pearl falls in luuuuuuv with an undocumented immigrant ranch worker and starts making all the wrong choices, one of which leads to someone's death.
The book is well-written, and there are some gems, like this:

But Pearl drove me nuts a lot of the time. She's selfish and petulant. Like a teenager, which she is. But her realisticness was annoying rather than endearing. Maybe a teenager reading this would see it differently?
I can see that Dark Water is well done. I just didn't enjoy it enough to say "Yes, this is one of the best books of the year."
Posted by Kathleen McDade at 9:01 PM No comments:

Back in March, I reviewed a new book called Mockingbird, by Kathryn Erskine. I loved it, and my 10-year-old daughter loved it, and I said

I'm predicting that MOCKINGBIRD will be one of the best middle-grade/YA novels of the year.

So I'm very excited to share that Mockingbird is now a finalist for the National Book Award in Young People's Literature!
The other finalists include:
I haven't read any of the others. I've heard a lot of buzz about One Crazy Summer, and I do have it on my to-read list. I think I'll add the others, read 'em, and report back. The National Book Awards Dinner and Ceremony is on November 17, so I've got a month!
Has anyone else read any of these books? Do you have a favorite in this race?
Posted by Kathleen McDade at 9:19 PM No comments: