Back in January, as Wendy was in the throes of Cybils judging, she emailed me, "You should read The Frog Scientist. You will really dig the protagonist."

I was delighted to hear that The Frog Scientist won the Cybils Award for Middle Grade/Young Adult nonfiction, even though I hadn't read it yet; I had faith in my sister's good judgment. I read The Frog Scientist, written by Pamela S. Turner, photographed by Andy Comins, this past week and oh, I loved it!

Part of the Scientists in the Field series from Houghton Mifflin Harcourt, The Frog Scientist gives a close-up (very froggy) view into the life of biologist Tyrone Hayes. Hayes and his students at Berkeley move between pond and lab as they study the effects of atrazine (a pesticide commonly used in the U.S.) on frogs.

"Watch out, they kill some frogs," my daughter solemnly warned her father when he picked up this book. While readers don't actually see the dissection, Turner describes in fascinating detail how the experiments are set up and conducted, including the removal of tiny, tiny kidneys and testes from young frogs in the lab.

Science teachers will rejoice in the clear, concise explanations of how a hypothesis, manipulated variable, responding variable, and control group are used in the real world.

Students will be fascinated by the photographs and descriptions of unusual, sometimes endangered or extinct, amphibians. 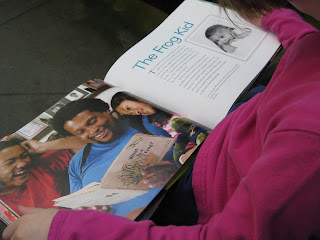 And everyone who loves books, like me, will thrill to the sight of Tyrone Hayes reading his children the book that started it all, a gift from his own mother when he was a little boy.

Thanks, Cybils panelists and judges, for sharing The Frog Scientist with all of us.

A New Kind of Book Order 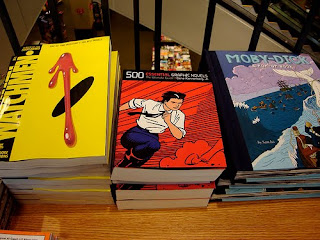 In the homework folder today: “Dear Families: Our school has the amazing opportunity to pilot a new book order through Dark Horse Comics. The books are all comic books and graphic novels. They range in price from $5 to $7. There is an order form on the back of this flyer.”

And from the order form: “At Picture Literacy, we know that comics make readers! Increasingly, educators worldwide are recognizing the graphic novel as a great way to reach at-risk and reluctant readers at a young age.”

My children are neither at-risk nor reluctant, but they do enjoy reading comics. Their father/my husband is a comic book aficionado, so he encourages it. Reading and discussing comics is a good bonding activity for them. And they don’t only read comics; they also read books far beyond their grade levels, so it doesn’t worry me at all.

I’m interested in this book order because Dark Horse is local to Portland, and because it’s something new and different (i.e., not Scholastic). I do like the idea of supporting a local company as well as the school.

The front of the order form features two children's series I haven't seen before: Johnny Boo and Korgi. Inside are more familiar titles: Star Wars, Bugs Bunny, Powerpuff Girls, Scooby Doo, Justice League, Teen Titans. Most of these aren't actually Dark Horse titles, so I suspect that Picture Literacy is some separate program that Dark Horse is working with (I can't find any information about it online).

The choices are limited. There are only twenty titles in all to choose from. I think we’d be more likely to buy in the future if we had more options, especially books for older and more advanced readers (or, you know, if we could buy Serenity books). We’ll probably order at least one or two books this time, to support the school and to see what the books are like.

What do you think about this type of book order? Would you support it at your school? 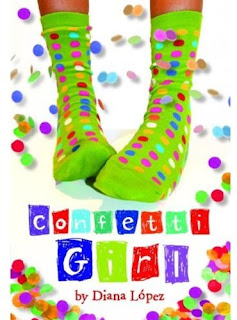 "It's exactly like Spanish class," I emailed my brother a little over a year ago from Oaxaca, Mexico, where I was spending Christmas. "I mean, people are literally running around hitting each other over the head with eggs full of confetti."

"REALLY?" he responded. We were surprised, and delighted.

Four of the six Burton siblings studied Spanish in high school. We succeeded in learning very little Spanish, but boy, did we learn a lot about La Llorona and pinatas and El Dia de los Muertos and... cascarones, the aforementioned eggs full of confetti, which feature prominently in the delightful Confetti Girl.

I enjoyed so many things about Confetti Girl that I've tried to write this review five times already today, because I couldn't figure out what to focus on. Like Kate Messner's The Brilliant Fall of Gianna Z, Confetti Girl stars a protagonist who is a smart-but-not-bookish girl. I don't think we could ever have enough of those in fiction aimed at middle school students.

In one of my favorite scenes, protagonist Lina and her friend Vanessa sell cascarones at the school fair, which results in--naturally--confetti everywhere. It's a scene that's joyous and authentic, and it didn't surprise me when I found out that author Diana Lopez teaches middle school. But for all its joie-de-vivre, Confetti Girl never descends to High School Musical-level hokiness.

Or to Lurlene McDaniel maudlinness. Because, you see, it could have--Lina's mother died unexpectedly not long ago, and Lina's father shows signs of clinical depression, and Lina is in charge of cooking dinner every night, and she has to get help with buying "girl stuff" from her best friend's mother--do you feel like you read this book in middle school twenty years ago? It isn't like that, I promise.

In another parallel with Gianna Z, there's a lot going on in this book. The loss of a parent, single parenthood, early romance, middle school friendships, environmental science, sports, poor grades; but it is all woven together beautifully by Lopez, and infused in every part with Latino culture in a way that is neither forced nor didactic. It will not feel confusing to girls of other cultures, nor, I think, tiresome to the most culturally aware Latina girls.

You have kids waiting for Confetti Girl in your homes and your schools. It'd be an excellent choice for these mother-daughter book clubs I keep hearing about. And from the depths of my inexperience, I'm going to guess that it'd be a successful hand-sell.

Oh, how I wish this book had gotten some Pura Belpre recognition. It is full of life and pure joy.
Posted by Wendy at 12:22 PM 4 comments: