This year's Seattle International Film Festival features adaptations of two young adult books which have little in common except that I really liked both the books--and the movies sound good too. Fat Kid Rules the World, based on the novel by K. L. Going, was filmed in Seattle. I missed it at SIFF, but look forward to seeing how the humor and punk rock music come through on film at a future screening. 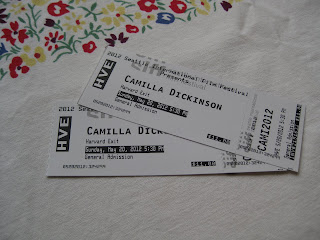 Camilla Dickinson, based on the 1951 novel by Madeleine L'Engle, premieres tonight. I am so excited to see it, even though I have avoided all previous L'Engle film adaptations. Somehow I have high hopes for Camilla. It probably has something to do with how, upon first hearing about the movie a few months ago, I went to the movie website, and said, "OMG that's Pompilia Riccioli!" I look forward to seeing Camilla's New York, which I have walked so many times on the page, on screen.
Posted by LaurieA-B at 4:07 PM

I'm a little shocked at how few specifics I remember about this book, considering I've read it several times. I do hope that Camilla and Luisa meet up for breakfast and order sandwiches instead of breakfast food. :)

They did! Oh, they did! Luisa ordered egg salad, Camilla a BLT.

Had a wonderful evening with Laurie and Wendy at the premiere. Got the insider's view on breakfast sandwiches, vermouth cassis, and the difference between Upper East Side Capitalists and Village Bohemians…